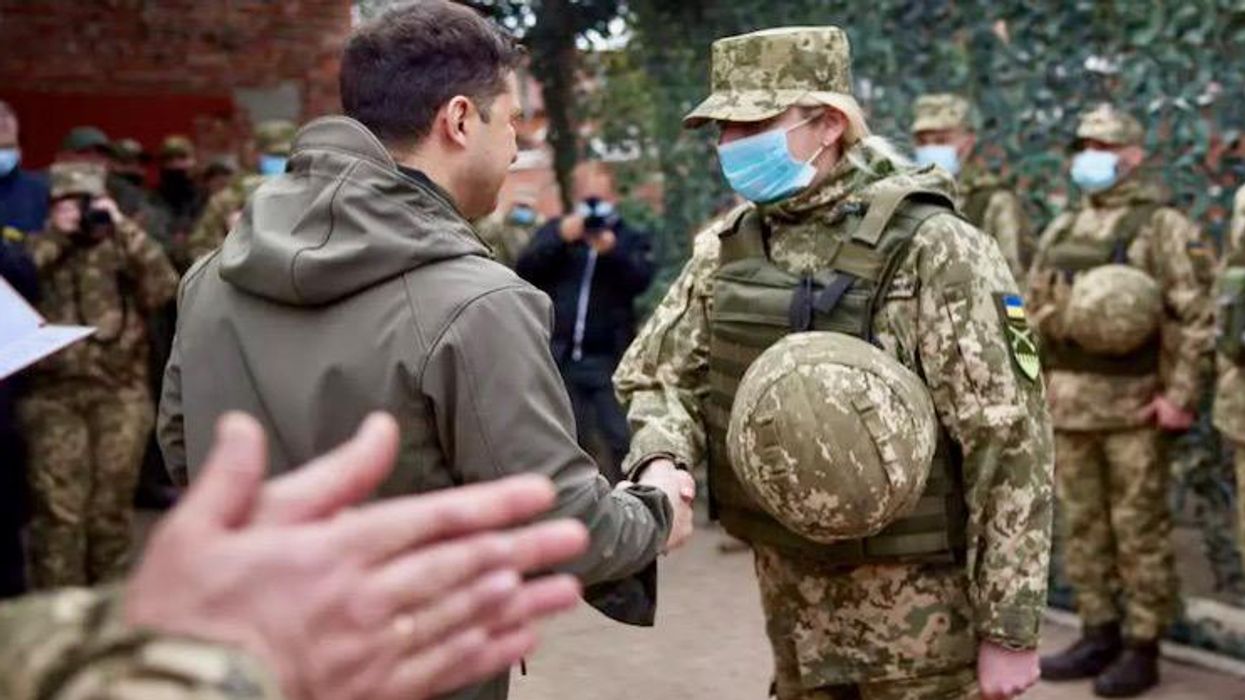 Zelensky’s frontline visit came as fighting between the Ukrainian army and separatists has intensified in recent weeks and Russia has built up troops along the border, raising fears of a major escalation in the long-running conflict in Ukraine’s mainly Russian-speaking east.

In a phone call with Putin on Thursday, Merkel urged him to reduce Moscow’s “troop reinforcements” on the border “to de-escalate tensions”.

Putin for his part “drew attention to the provocative actions of Kiev, which has recently been purposefully exacerbating the situation on the frontline,” the Kremlin said.

The Ukrainian military on Thursday announced that another of its soldiers had been killed, bringing to 25 the number of troops killed since the start of the year, compared with 50 in all of 2020.

Zelensky, who has urged NATO to speed up his country’s membership into the alliance to support Ukraine, said he had visited positions where “the largest number of violations” of a ceasefire had been recorded, the presidency said in a statement.

Images released by his office showed Zelensky in the trenches clad in a helmet and bulletproof vest, handing out awards to Ukrainian soldiers and shaking their hands.

“Thank you for keeping people calm and protecting our land. You are a real example of heroism and dedication,” Zelensky said. “We remember every soldier who died defending our state.”

Fighting in the conflict, which erupted after Russia’s annexation of Crimea from Ukraine in 2014, subsided in 2020 as a new ceasefire agreement took hold last July.

But clashes, mainly involving artillery and mortar fire, have picked up again since the start of the year, with both sides blaming each other.

Ukrainian separatists are widely seen as having Russia’s political and military backing, which Moscow denies.

Ukraine last week accused Russia of massing thousands of military personnel on its northern and eastern borders as well as on the Crimean peninsula.

Together with France and Germany, Ukraine and Russia are part of the Normandy format of countries that have sought to resolve the conflict since 2015 but have failed to end the fighting.

On Thursday, the Kremlin’s pointman on relations with Ukraine and pro-Russia separatists, Dmitry Kozak, said that peace talks were set to resume on April 19.

He warned that an escalation in the conflict would be “the beginning of the end of Ukraine”, describing that scenario for the ex-Soviet country as “not a shot in the leg, but in the face”.

The Kremlin has not denied the troop movements but insisted that Moscow was “not threatening anyone.”

Zelensky this week urged NATO to speed up his country’s request for membership in the alliance, saying this was the only way to end the conflict.

Alliance members responded with calls for Kiev to continue military and defense reforms.

In a statement on Thursday, Russian foreign ministry spokeswoman Maria Zakharova said NATO’s support of Ukraine “does not contribute to security” and “the settlement of the conflict”.

She added that Moscow was concerned about “financial and logistical support of the Ukrainian armed forces by NATO countries”, as well as the alliance supplying lethal weapons and Western instructors training Ukrainian military personnel.

Analysts have been split over Russia’s true intentions amid the latest escalation in tensions with Kiev, and some observers say Moscow may be testing US President Joe Biden’s commitment to defend Ukraine.

In his first call with Zelensky last week, Biden affirmed Washington’s “unwavering support” for Kiev in the conflict, which has claimed more than 13,000 lives since 2014.

He met with Putin in Paris in December 2019 and several deals were reached on prisoner exchanges, but there has since been little progress and no new meetings are planned.