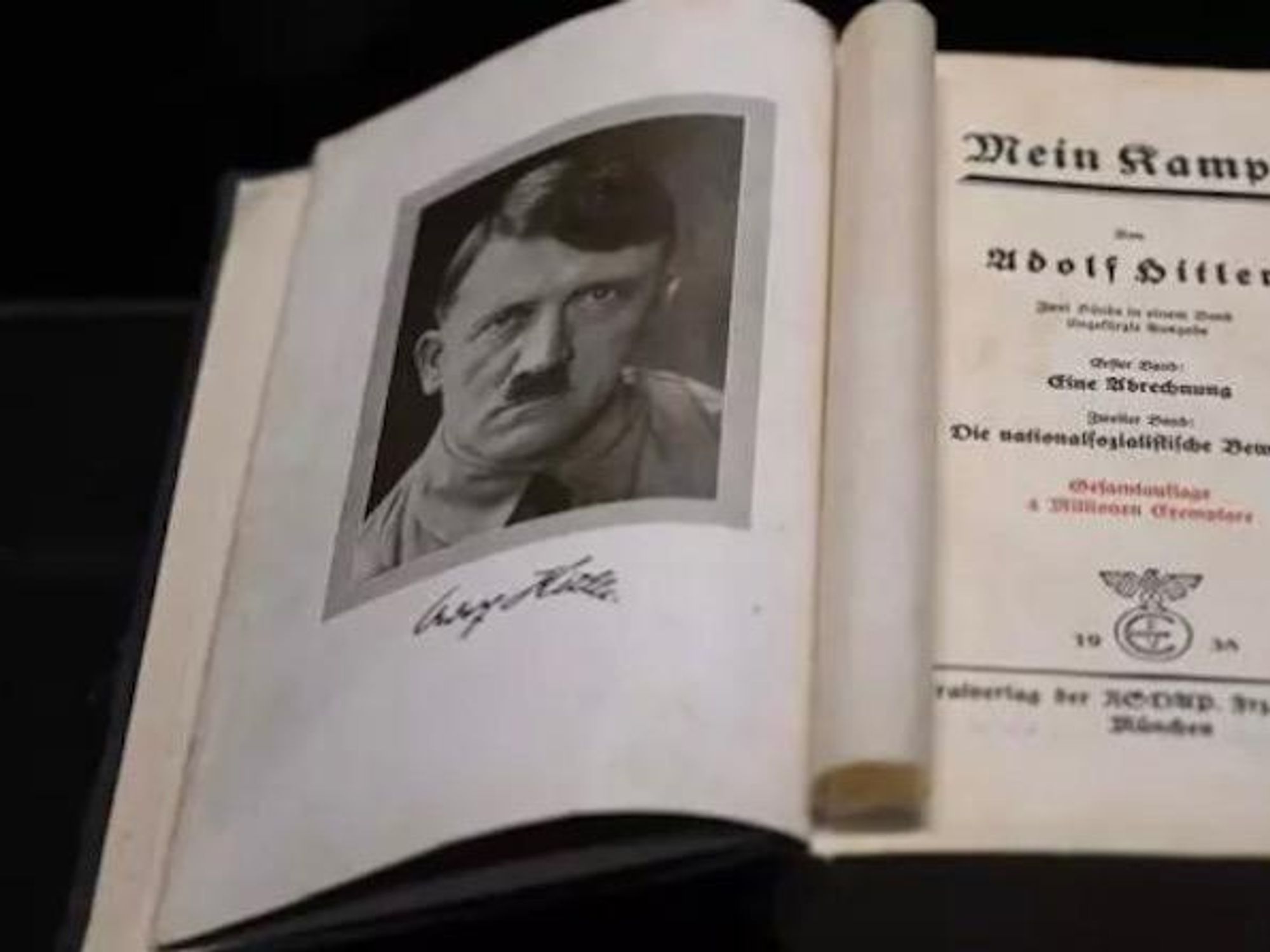 French publisher Fayard releases a new translation of Mein Kampf on Wednesday after years of delay due to the controversy over publishing Adolf Hitler’s racist, anti-Semitic screed. But historians behind the project say it will perform a valuable service in elucidating – and thereby disarming – the Nazis’ ideology for French readers.

Fayard were so keen to emphasize the edition’s scholarly nature that Hitler‘s name does not even appear on the tome’s bare, white cover. Nor is it titled Mein Kampf: The book is instead called Historiciser le mal, une edition critique de Mein Kampf (“Putting Evil in Context: A Critical Edition of Mein Kampf”)

This is especially apt because most of the text is in fact historians’ commentary on Hitler’s writing, explained Hélène Miard-Delacroix, a professor of German history at the Sorbonne University in Paris. “It’s the fruit of a decade of historical research, these notes and critical annotations make up two-thirds of the book, so it would be inaccurate to describe it as just a new translation,” she said.

Hitler wrote Mein Kampf (German for “My Struggle”) in 1924-25, when he was in prison for his leadership of the failed Beer Hall Putsch in Munich in 1923. The text is a manifesto for his Nazi ideology, which led to the murder of some 6 million people in the Holocaust. Mein Kampf also has an autobiographical dimension, with Hitler recounting his childhood in Austria and experience as a German soldier in the First World War.

Bookshops will not stock the edition on their shelves: It is available by order only. It is also inaccessible to many readers, priced at €100 euros. Fayard will not profit: All the proceeds will go to the Auschwitz-Birkenau Foundation. Instead of a launch party, there was a sombre event at the headquarters of Paris think-tank the CNRS on May 19 to mark the book’s publication.

Miard-Delacroix thinks it is good that French readers will now have this source of insight into Nazism. “Seeing as fewer and fewer people learn German as a foreign language, it’s important to offer historians, teachers, professors, students and people who are simply curious about history a reliable translation of this text,” she said.

The first French translation of Mein Kampf was a heavily altered text published by Nouvelles Éditions Latines in 1934 – preserving the racist, anti-Semitic ideological content but changing the writing style. “The translator tried to improve the text’s literary qualities, because Hitler had no literary ability,” Miard-Delacroix said. Fayard produced a different modified edition in 1938, cutting out Hitler’s Francophobic passages.

By contrast, the new Fayard version – by Olivier Mannoni, renowned for his translations of Franz Kafka, Sigmund Freud and Stefan Zweig from German into French – stays closer to the original, highlighting Hitler’s limited vocabulary and repetitive style.

A committee of a dozen historians worked on the scholarly aspect. A long introductory essay shines a light on the permutations of the Nazi ideology found in each of Hitler’s 27 chapters. Some 2,800 footnotes contextualise the original text. These supplementary materials are crucial, Miard-Delacroix said, in providing the reader “with all the necessary information to understand the nature of Mein Kampf by spotting Hitler’s lies and omissions – the fact, for example, that he was not the great heroic figure in the First World War that he claimed he was”.

‘Mein Kampf is part of our reality’

Anglophone readers have been able to examine Hitler’s manifesto for decades. British publisher Hutchinson (now part of Penguin Random House) published a translation by German Jewish émigré Ralph Mannheim in 1939 – seeking to give readers a better understanding of the ideology they were fighting in the Second World War.

The US government bought the American copyright to Mein Kampf during the war through the Trading with the Enemy Act – collecting more than $139,000 in royalties, disbursed mainly to US ex-prisoners of war in Nazi Germany, before selling it to publishers Houghton Mifflin in 1979.

The French copyright to Mein Kampf entered the public domain in 2016 – meaning that anyone can publish an edition. France ruled in 1980 that any new edition requires an introduction of at least eight pages to put Hitler’s work into context, but that seems a slim requirement given the extremity of the content. This factor made it “urgent that an edition with an excellent critical apparatus filled the vacuum”, Miard-Delacroix.

France is not alone in publishing a new scholarly edition of Mein Kampf over recent years. Warsaw publishing house Editions Bellona published a new 1,000-page critical version in Polish in January. A new 2,000-page, two-volume critical edition in the original version was published by the Munich-based IfZ historical research institute in 2016.

The French project was finished several years ago. But publication was repeatedly delayed because of opposition from prominent figures.

Several Jewish associations criticized the project in 2019, citing the need to honour the memory of Holocaust victims – prompting Fayard to delay publication.

Now that publication has finally gone ahead, some voices in France have criticised Fayard’s decision to proceed shortly after the Israeli-Palestinian conflict’s latest flare-up. Paris police banned a planned march through the east of the city at the peak of the fighting fighting last month – as French authorities feared a repeat of the ugly scenes at protests during the 2014 Gaza conflict, which saw synagogues targeted and chants of “death to Jews”.

But the new edition cannot be postponed indefinitely, because understanding Mein Kampf is a more valuable tool than ever in helping people confront Nazism, Miard-Delacroix underlined.

“Whether figures such as Mélenchon like it or not, Mein Kampf is part of our reality,” she said. “The Fayard edition’s critical notes and essays provide crucial weapons for deconstructing Nazism.”

This article was translated from the original in French.